Australia Wide Safaris has a good population of banteng at Carmor Plains. Banteng are a bovine species, Bos Javanicus, however their similarity to cattle ends right there. Banteng are an elusive shy animal and startle easily. They run in a graceful manner more like a deer and are extremely agile for such a large animal. A large bull can weigh 600kg (1300lbs)

They carry an impressive set of curved trophy horns, with a length per horn of 18″- 25″ on a very big bull. The diameters vary from 10″- 14″. The horns of a mature bull have a lot of grooves and ridges on the base of the horns whilst the tips are more slender and smooth. The colouring of the Banteng make them a beautiful trophy, with a mature bull being black in colour with white rump markings and the lower half of the legs are also white. Very old bulls can sometimes be a brown and grey colour. Cows are a tan or brown colour with the same white markings, however their horns are much smaller. Hunting Banteng is done by a similar method to buffalo. Driving in the mornings and afternoons to areas where they are feeding or watering. Then following tracks or game trails from there on. The shooting ranges are generally quite close from 40 – 80 metres.

The recommended safari time required for a Banteng is 3 days or it can be incorporated with any of our other safaris. Banteng can be successfully hunted all throughout the year. [Accommodation Snippet][Rifle Rental Snippet] [Clothing Snippet] [Payment Snippet] 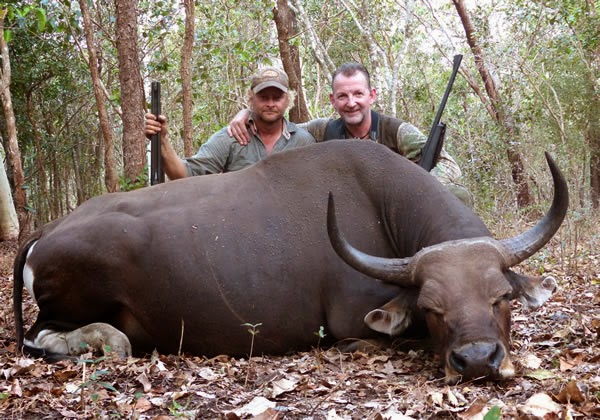